Usher in the New Year with Loving Contributions

Festive sounds of cymbals and drums permeated the Jing Si Hall in the afternoon of 1st January 2017, where 357 Tzu Chi Foundation (Singapore)’s charity beneficiaries joyfully gathered for a pre-Chinese New Year celebration. The annual event, which included a variety show and a healthy and tasty vegetarian meal, warmed the hearts of the aid and care recipients, and brought much cheer to them. Though needy themselves, many of the recipients brought their Tzu Chi bamboo coin banks and generously donated their savings in the coin banks to help others in need, thus paying the love forward.

On the 1st January 2017, Tzu Chi Foundation (Singapore) held its annual pre-Chinese New Year celebration for its Chinese aid and care recipients. This year, the organization planned to hold a festive celebration for each of the three main racial groups to which its charity beneficiaries belong, and the pre-CNY celebration was one of such events. 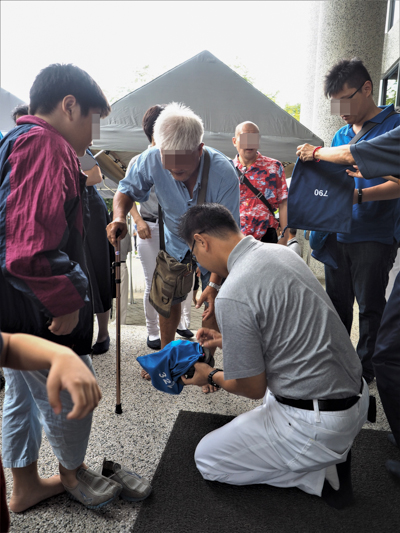 A volunteer kneels down to help an elderly aid recipient put her shoes into a shoe bag. Photo by Wu Ming Jun

Serving with Joy and Gratitude

At this Chinese festive event, however, Indian aid recipient Subramaniam could be spotted actively helping out alongside other volunteers. He was stationed at the carpark next to the Jing Si Hall, helping to direct on-coming traffic with hand signs and gestures. When he saw physically impaired aid recipients, he would initiate to help them, such as pushing their wheelchair for them. Though drenched in sweat in the hot afternoon sun, he worked tirelessly, lending a helping hand whenever needed. His presence and efforts were a moving inspiration to the mainly Chinese volunteers.

“When I saw on the video how Tzu Chi volunteers selflessly gave of themselves, I was very touched. I can still move about now, so I hope to do my best to help out at this event, to repay Tzu Chi,” shared Subramaniam.

A tent area was set up outside the Jing Si Hall, where free haircuts were offered to the visitors who arrived. With their backs bent, volunteers patiently cut the hair of each “client” according to the latter’s requests.

“It’s the beginning of a new year, so I must do a good deed. I’ve also asked my friends to join me,” said Li Xu Jing. Joining her on that day, were four of her friends. These helpful ladies specially learned hair-cutting, so that they could offer free haircut services at charity events. Despite the crude facilities and environment, the volunteers worked meticulously, gently brushing off the excess hair on their “clients” when they were done. 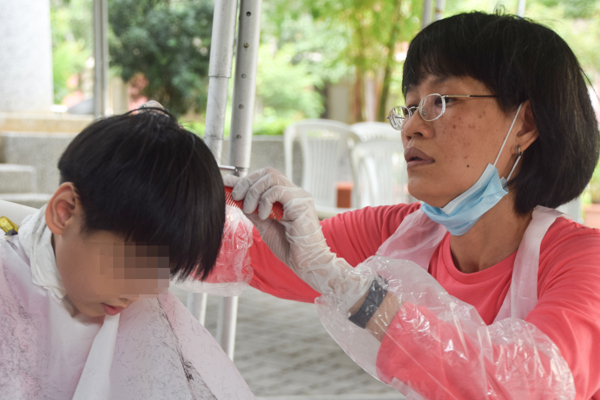 “It’s the beginning of a new year, so I must do a good deed. I also asked my friends to join me,” said Li Xu Jing (right), who gave free haircuts to aid recipients on the day of the CNY celebration. Photo by Fu Ya Tian

Aid Recipients Give Back to Show their Appreciation

Resounding drumbeats and clanging of cymbals filled the Jing Si Hall as the celebration programme opened with a lion dance. The roaring and enlivening dance brought much festive cheer and warmth to everyone present.

Then, two emcees who were dressed as a couple from the Imperial China Period went on stage, taking the audience back to the olden times when the Lunar New Year was celebrated. The programme that followed included a Chinese opera, CNY songs, dance performance by student beneficiaries of the Foundation’s aid programme, a song item performed by members of the Tzu Chi Collegiate Youth Association and teachers from Magic Fiddler Music School, etc. One of the aid recipients even gave a moving rendition of the song, “Seung Hoi Tan”, a well-known Cantopop song in the 1980s. 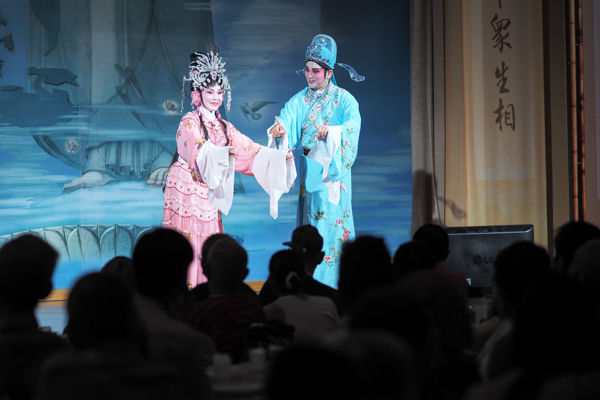 Chinese opera was one of the highlights of the CNY programme. Photo by Wu Ming Jun

Mr Wang, a former prison inmate, played the electronic organ in the band that presented a medley of CNY songs. He got connected with Tzu Chi in the prison during the monthly prison care visits by volunteers, and after he was released, he continued to receive care from the latter through their monthly visits. In addition, Tzu Chi assisted him in applying for a public performance license. Deeply moved by the help and support he received, Wang shared that if it were not for Tzu Chi, his life would have been very different now, as he would be at a loss as to which direction to take in life. 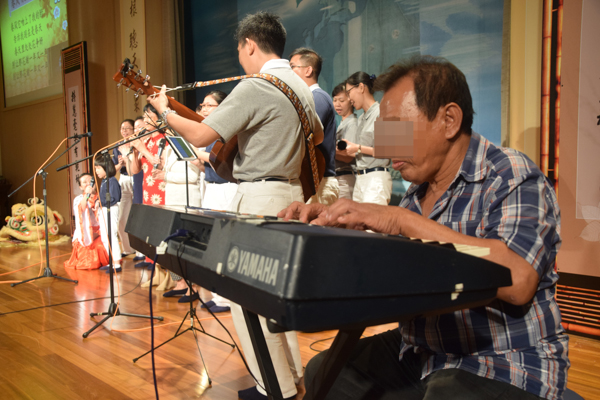 To show his appreciation for Tzu Chi’s help and support, Mr Wang (first from right), a former prison inmate, played the electronic organ in the band that presented a medley of CNY songs. (Photo by Fu Ya Tian)

To thank Tzu Chi for helping him, Mr Wang had offered to stage the item at the CNY event and arrived very early in the morning that day, to rehearse with the other volunteers.

“Tzu Chi has helped me a lot, and this is something I can do to pay back. Everyone in the Jing Si Hall is like a family to each other, I’m really happy to be here,” said Wang.

Every month, he looks forward to the volunteers’ visit as he enjoys their company. After singing the song, he shared that he was delighted to have the opportunity to present the song in Jing Si Hall and thanked Tzu Chi for giving him the opportunity. He also thanked the volunteers for giving him continual care over the past one year, so that he wouldn’t feel so lonely living alone.

Continuing the Cycle of Love

At dinner time, the visitors were served a delicious and healthy vegetarian meal as the popular CNY song, “The God of Fortune is Here”, was being played in the background. A volunteer dressed as The God of Fortune appeared to distribute gifts, delighting everyone present.

“There are so many performances and volunteers around, it’s really fun and exciting. I came to Jing Si Hall as I haven’t been here for a long time. I’m so happy to be here!” exclaimed an elderly aid recipient, who is wheelchair bound.

Towards the end of the celebration event, aid recipients who brought their bamboo coin banks filled with savings queued up on stage and took turns to pour their donations into a big urn, to do their bit to help others in need.

“I’ll put coins into the bamboo bank every day. Although it’s only a few cents, I hope to donate what little I have to Tzu Chi to help others who are in need. I feel happy when I see everyone so happy,” said Mr Wu, another aid recipient.

A few years ago, both Wu and his wife fell ill and lost their source of income as a result. Learning of their situation, Tzu Chi volunteers stepped in to provide care and aid to the couple, so that they could tide over the difficult time. Now, they actively volunteer in Tzu Chi and also donate their savings to its charity fund. 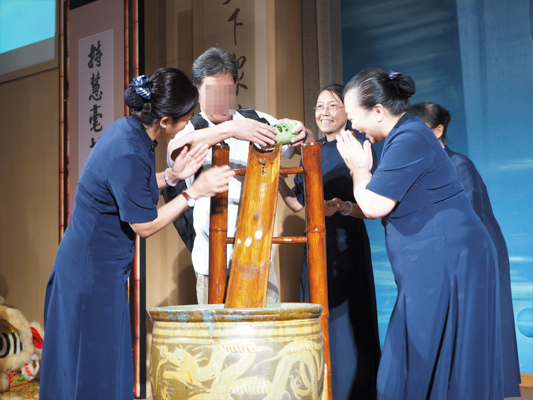 Though not well-off himself, to show his gratitude, Mr Wu (second from left) donated his savings to Tzu Chi to help others in need. (Photo by Wu Ming Jun)

85-year-old Grandma Huang happily shared about the bamboo coin bank laden with coins that was hanging behind her wheelchair: “I’ve saved up in this coin bank for 3 to 4 months. After every grocery shopping trip, I’ll put my spare change into the coin bank. Then I’ll bring it to Jing Si Hall when I come here.”

Before they went home, the aid recipients were each given a CNY goodie bag. After the crowd had left, quietude filled the Jing Si Hall as the sun set in the evening; but the love and warmth brought by the aid recipients continued to linger.

A New Life Gained and a Family Transformed by the Dharma

Cui Li’s husband Xu Liang Tong is one of the beneficiaries of Tzu Chi’s charity mission. In September 2011, his family was in dire straits when he lost his capacity for daily functions due to post-operative complications from a brain tumour removal. With

Seniors Appreciate the Thought that Counts

Apart from Children’s Day and Youth Day, are you aware that there is an International Day of Older Persons (UNIDOP)? To raise international awareness of population aging and the needs of the elderly, the United Nations has designated 1 October of every ye