The Next Generation Eco-Warriors!

Potato, mushrooms, cucumber, chicken, bacon…… What type of filling do kids like in their burgers? Tzu Chi Singapore’s collegiate volunteers used food replicas made of play dough as educational tools for children to learn how their food choices might affect the environment.

Tzu Chi’s Festive Charity Fair, which was held at the open field next to Pasir Ris MRT station in January this year, offered a wide variety of vegetarian snacks and traditional delicacies, allowing people to discover a rich variety of vegetarian fare, while at the same time promoting environmental vegetarianism. The event was enlivened by innovative activities, such as fun games, vegetarian cooking workshops, live performances, fruit and vegetable costume shows, etc. created and conducted by the Foundation’s young volunteers ranging from primary school to university students.

Melodious sounds of heartwarming songs filled the venue throughout the two-day bazaar. At a small stage located in one corner, teams of volunteers took turns to present sign language and music items, showcasing their musical talents and drawing a considerable crowd to view their performances. 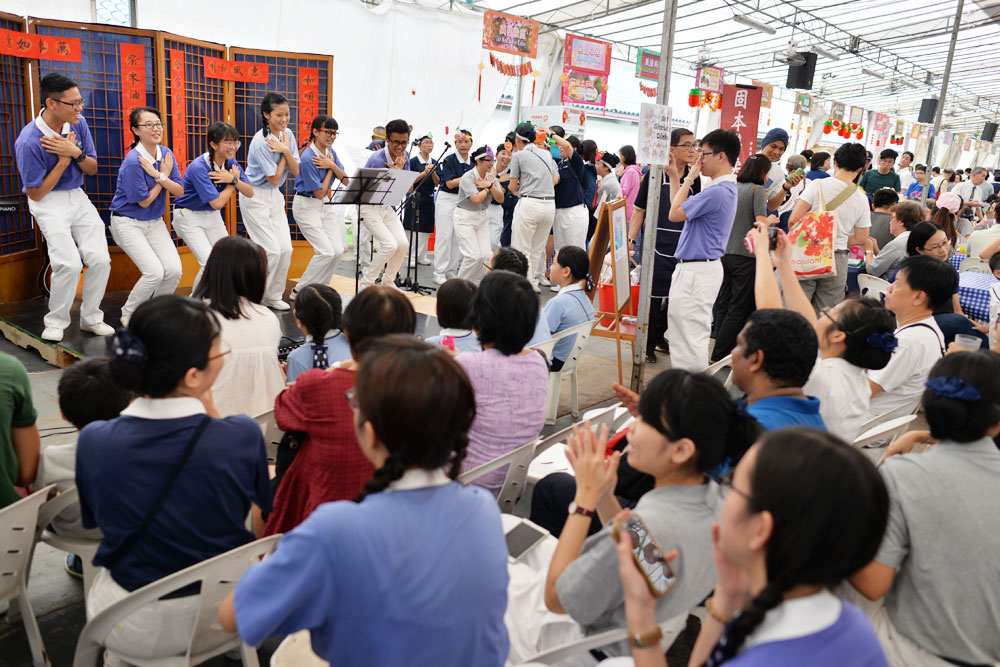 In one of the stalls set up by Tzu Chi collegiate volunteers to promote vegetarianism, many replicas of meat, vegetables and fruits made from play dough were on display. Visitors were invited to create their own models based on their dietary preferences, and the collegiate volunteers were on hand to explain the carbon emissions generated according to the types of food consumed. Meat dishes generated the highest amount of carbon dioxide, with beef sitting at the top of the carbon emissions table, while fruits and vegetables generated the least amount of carbon dioxide.

Through the simple and interesting activity, people learned how climate change is closely linked to a meat-based diet, and how, by simply switching to a vegetarian diet, we could help to lower Earth’s temperatures. 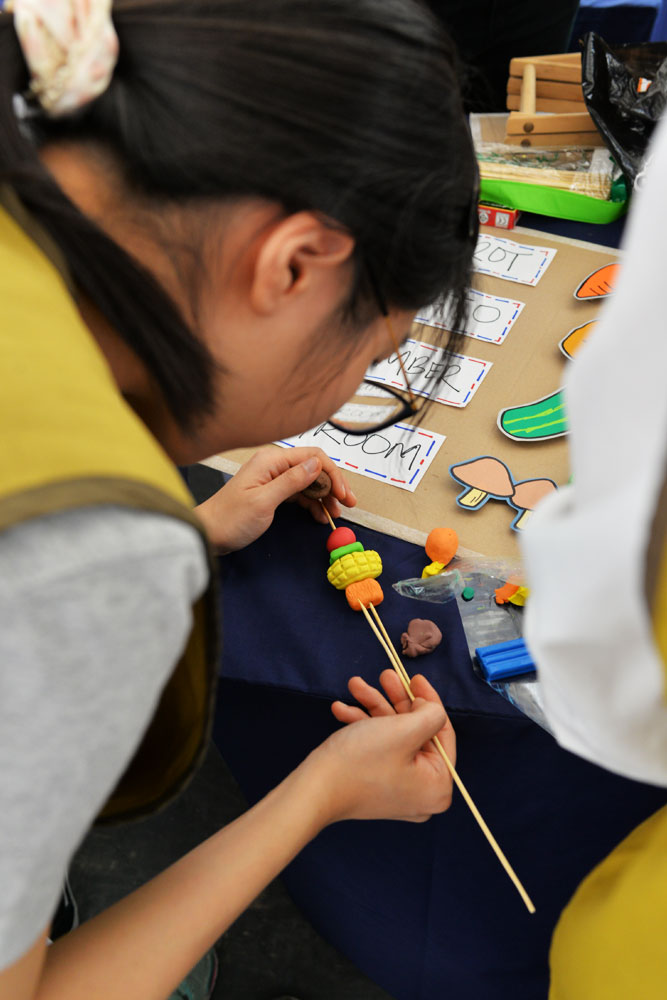 Vegetables, fruits and meats contain varied amounts of calories. In another games stall, visitors were invited to use ping pong bats to fan at bottles labeled as “meat”, “vegetables” or “fruits”, till they toppled over. The bottles labeled as “meat” were heavy-laden and required much vigorous fanning before they toppled. The participants thus learned a precious lesson that meat needs a lot more energy to be completely metabolised in our bodies. 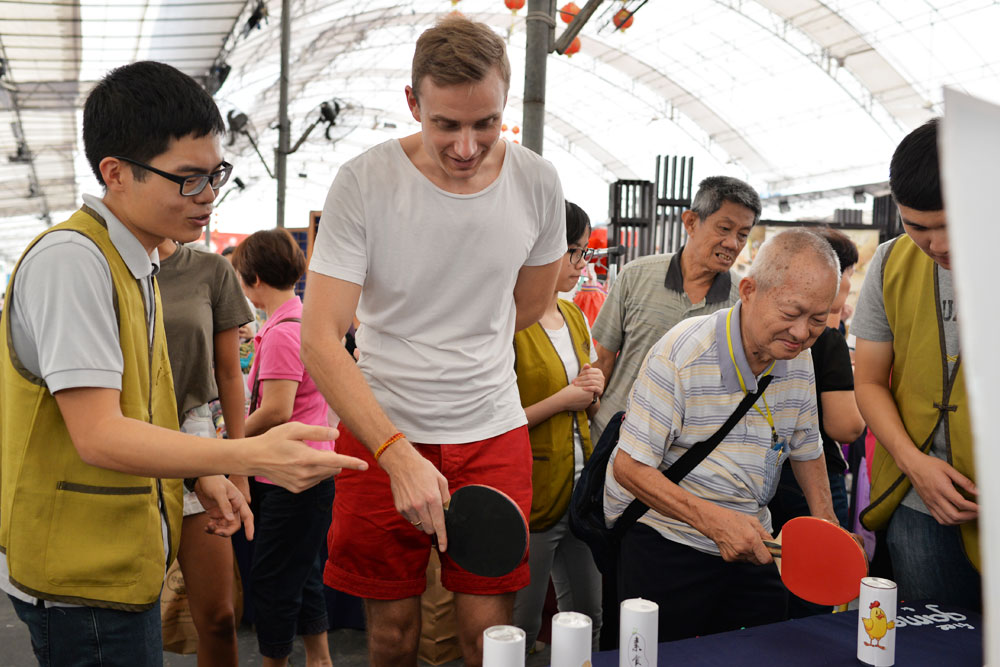 “The games attracted the children; their parents will also be drawn in to participate, too. They can grasp the importance of vegetarianism through the activities, which also help them to develop a deeper impression towards vegetarianism,” shared Chen Hui En, a collegiate volunteer.

This was the first time Chen had attempted to promote vegetarianism through games. The youth volunteers also promoted a light and handy reusable shopping bag with pretty tree motifs designed by Chen, who has an interest in art. Each of the pictures was matched with the Jing Si Aphorism in Chinese, “人生为人类付出多少，就得多少踏实感.” (Tr: “How at ease and confident we are in life depends on how much we have done for humanity.”)

The ambassador for the vegetarian/vegan group “HappyCow”, She Qing Hui, took the initiative to contact Tzu Chi. He was dressed up as the HappyCow mascot at the charity bazaar, and promoted the use of the HappyCow mobile apps to visitors, so that they could receive the latest information about vegetarian eateries around the globe.

Children from Tzu Chi Great Love PreSchool, who were wearing cute “fruit costumes” made from used cardboard cartons, mingled among the crowds to promote the concept of environmental protection. Some even hung small baskets around their necks, peddling cakes and other snacks.

On the second day of the charity bazaar, students from the Tzu Chi Teenagers’ Class could be seen clearing plates, wiping tables and picking up rubbish. Impressed with their efforts, She Qing Hui commented: “As I walk around the venue, I can see that Tzu Chi has done an excellent job in environmental education, and has a good system in promoting vegetarianism.”

Mrs She came on the second day of the bazaar to help with promoting vegetarianism. The couple had gained a deeper understanding of Tzu Chi’s Charity Mission, and they even asked to adopt three Bamboo Coin Banks, with the hope of inculcating their children with the habit of saving a little daily for charity.

“I am selling cupcakes!” 6-year-old Xu Yu Wen said with a childish innocence on her face.

Her mother, Mdm Guo Su Ting had witnessed the growth and progress of her daughter in Tzu Chi Great Love PreSchool. Presently, all the three of her children are attending the childcare centre in Yishun.

On this day, Mdm Guo and her husband had brought their children to the charity bazaar to help with selling cupcakes and other snacks. “I’m very happy to see my children bravely facing the crowds and willing to serve,” she said.

“Charity work is not about who does more or less. What’s most important is you do it wholeheartedly. All along I’ve always sewn clothes for my daughter and granddaughter. When I was invited to contribute to the charity bazaar, I thought I could serve in my strength,” shared one of the PreSchool students’ maternal grandfather, Xu Ya Qi (pictured below).

He had purchased various coloured fabrics, and managed to sew 50 girls’ dresses for sale at the charity bazaar. During the event, his granddaughter was the best model for his hand-sewn creations, and the happy grandfather was also on hand to share the dresses’ design concepts with the visitors. 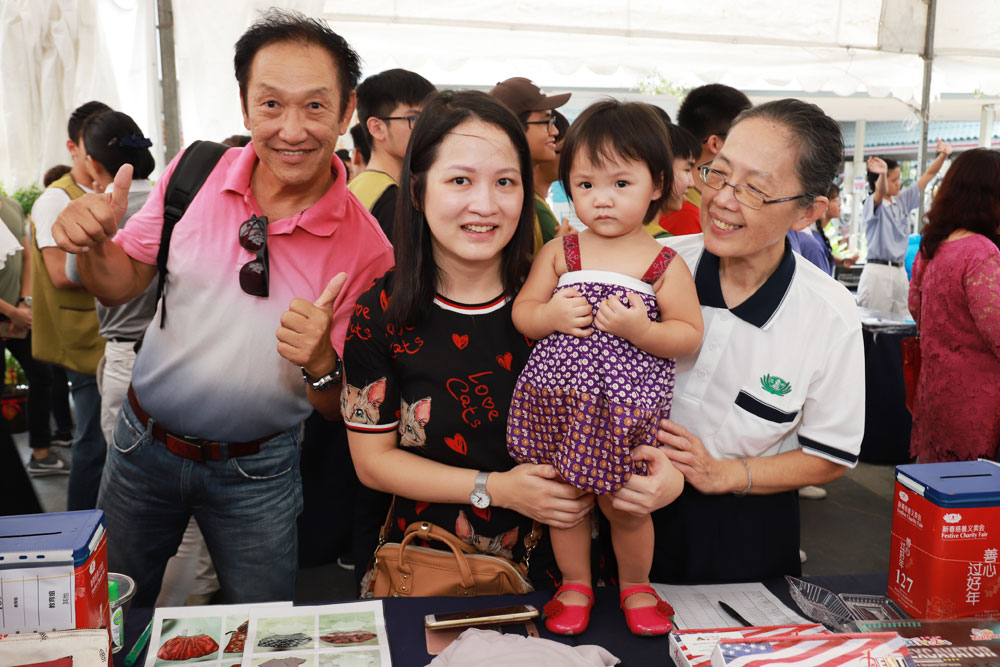 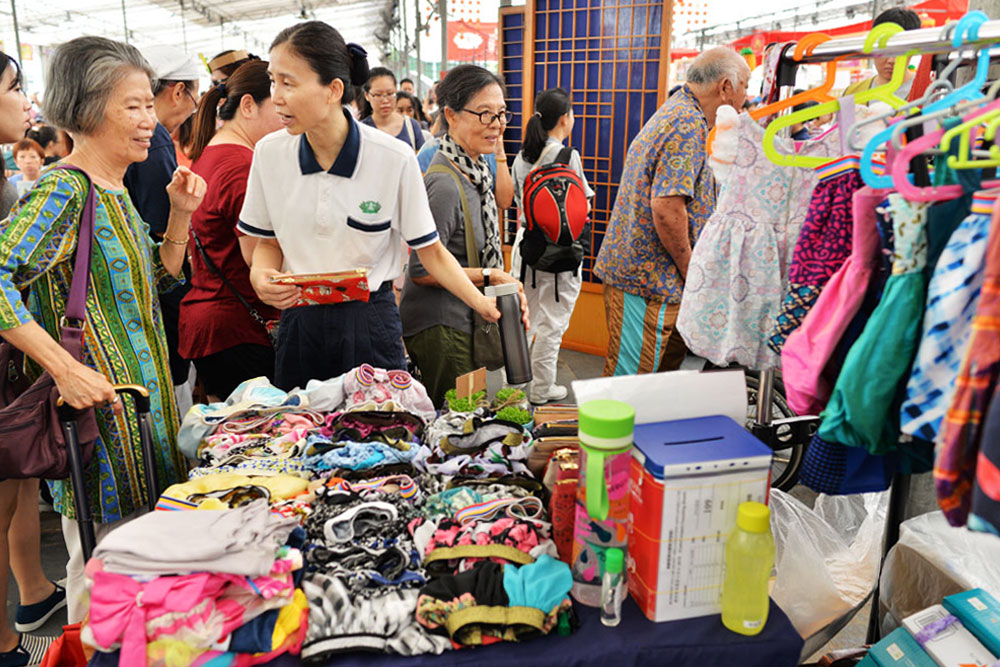 “This is my first attempt in making vegetarian food. The recipe is quite simple, and it’s easy to learn as well. I may even try bringing boxed vegetarian meals to work. This kind of vegetarian rice rolls is also a healthier alternative; they are made without oil,” said Ms Ma Shu Yan, who takes vegetarian meals occasionally.

She had taken part in the annual charity bazaar a number of times in the past, and this was her first attempt at making vegetarian food. After mastering the skills, she thanked Tzu Chi volunteer leader, Joyce Goh, who had patiently guided and taught her.

After a year of application process, Jurong West recycling point officially begins its operation on 12 February.

A Special Love, For You Who Defend Us at the Frontline

Words themselves have no tangible weight,
but a careless remark can weigh people's hearts down.