An Inspiring and Fulfilling Journey with Tzu Chi

During the latest Tzu Chi medical aid mission in Laos, I was asked to share my volunteering experience with Tzu Chi, and how I have tried to put my understanding of the Buddha’s teachings into practice. I hope that this sharing would encourage those who are considering volunteering with Tzu Chi to give it a try! 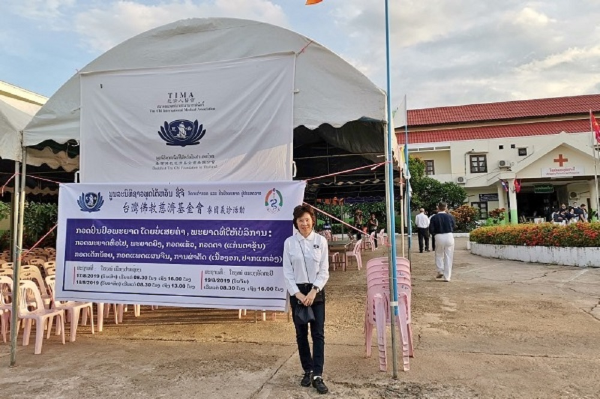 I first got connected with the Tzu Chi Foundation some 15 years ago through a close Dharma friend of mine, who introduced me to Dr Fong Poh Him, Head of the Singapore chapter of the Tzu Chi International Medical Association (i.e. TIMA Singapore). It was at the briefing for an upcoming Tzu Chi medical aid mission in Batam conducted by Dr Fong where I found out what the organisation was about. During his talk, he spoke of Dharma Master Cheng Yen (the Taiwanese Buddhist nun who founded Tzu Chi), her philosophy, and the extraordinary compassion she embodies for suffering people around the world.

I learnt from Dr Fong that Tzu Chi places great emphasis on walking the talk by reaching out to those in need through action based on the underlying principles of compassion, kindness and gratitude. Later that evening, I chanced upon an exhibition on Tzu Chi’s medical and disaster relief missions at the Foundation’s former premises in Chinatown, which reaffirmed what I had heard from Dr Fong. It was then that I decided to volunteer at Tzu Chi’s medical and disaster relief missions. It also inspired me to join other Tzu Chi volunteer activities at the HCA Hospice, Kwong Wai Shiu Hospital, and its Free Clinic. And my volunteering journey has been a very fulfilling one indeed!

Among the 20-plus medical aid missions I have volunteered in, the one to Hambantota, Sri Lanka, in the aftermath of the South Asian Tsunami disaster was one of the most memorable. It was the first time that I witnessed the catastrophic scale of destruction and damage a natural disaster could cause. The journey to the site of our relief mission was tumultuous, with roads disrupted and the putrid smell of death (from the corpses of the disaster victims) lingering in the air, leaving many of us shell-shocked and heartbroken.

At the mission site, I was touched and heartened to see the camaraderie and self-sacrifice (of people) that was born out of the mega disaster, with volunteers and survivors working together hand-in-hand to rebuild and recover. All this was driven by the synergy of compassion and selflessness. Each day, we were filled with renewed inspiration, strength and determination to carry out the relief work, which lasted 12 to 15 hours a day for about two consecutive weeks. Everyone was single-mindedly focused on getting the work done with minimal fuss. What an immense joy we felt when we completed all the tasks that we had set out to do!

I also recalled a particular local family that the volunteers had visited to offer food and some basic essentials. The family happily shared with us that they had taken in a young girl orphaned by the tsunami and treated her as their own child. This is despite them having very limited resources, except for the love of a precious young life. As I personally observed this genuine act of kindness and life-long commitment to care for a child, I was reminded of the true practice of the Perfection of Generosity in the Buddha’s teachings.

I also volunteered in a Tzu Chi medical aid mission at the Victoria Home for Incurables in Sri Lanka, which accommodates those who are permanently disabled. When I arrived at the Home, I saw that the living conditions were largely unsanitary. The residents, most of whom were bed-bound, slept, ate and relieved themselves on their designated beds. Many could not use the common shower facilities and had not showered for some time. We started with cleaning up the compound.

Then, I heard another volunteer calling out: “Let us go and bathe the bodhisattvas!”

As the mission was held during the Vesak Day period, I thought she meant that we would be joining a Buddha Bathing ritual. But when I saw the volunteers giving showers to the residents of the Home, it dawned upon me how Tzu Chi truly inculcates and practises respect and compassion for the needy. We were encouraged to join the activity. Some did, but others did not, including me. I realised that I still had a long way to go to truly embrace the practice of equanimity towards others.

During the mission, I met a long-term resident who sewed artwork by her bed to make some extra income. As she shared her story with me, I noticed a tinge of sadness in her eyes and voice, and it stemmed from her being unable to return to her home. While comforting and encouraging her, I felt inspired to help others in a similar plight in Singapore. After returning home, I ventured into befriending cardboard collectors around Little India area. Many of them are elderly, and they earn a living from collecting and selling cardboard to agents. Together with some friends, I spent time mingling with them while offering them food and drinks as well as some other basic necessities.

Volunteers who have served in Tzu Chi for some time might have been given a bead bracelet by Dharma Master Cheng Yen when they visited Tzu Chi in Taiwan. The beads of the bracelet glow in the dark, and the items is not for sale. I had one, which I treasured very much. Sometime ago, one of my relatives fell ill and was admitted to a hospital where he was diagnosed with a brain disease. While visiting him at the hospital one day, I gently comforted him by holding and massaging his hands as he lay in bed. At one moment as he was holding my hand, he moved the bracelet that I was wearing over to his wrist. The next day he was wheeled into the operating theatre for his surgical procedure.

For many days, I kept thinking about the bracelet and the image of the bracelet kept appearing in my mind. It just wouldn’t disappear, but it was not that I wanted to take the item back from him. Later, I learnt that he had a successful operation. His condition improved significantly over time, and he now lives and functions normally. When we met again, I saw him wearing the bracelet on his wrist, and he actually wanted to return it to me. I took the opportunity to share with him the great compassion of Master Cheng Yen and the guiding principles for the volunteers wearing the bracelet.

After that incident, as I reflected on my experience joining the various Tzu Chi medical and disaster relief missions, I finally learnt to “let go”, both physically and mentally. This serves as a reminder for me to practise non-attachment, even to things that I perceive to be valuable. Rather than bemoaning about the loss of a valuable material possession, it is more important that I can bring comfort and peace to those in need.

These life experiences have changed the way I think, act and see life. Practising the Dharma through participating in the Tzu Chi aid missions and continuing the practice even after the missions, have given me a greater understanding of Buddhism and added valuable meaning to my life. It has brought peace to my chaotic mind and helped me become a better person.

I would like to encourage prospective volunteers not to be worried about any language, physical or psychological barriers that you may be facing—the Tzu Chi family of brothers and sisters are always there to guide and support you through your journey of volunteerism.

Editor’s note: The author is a pharmacist and a long-term member of the Tzu Chi International Medical Association

Seeing the World in a Whole New Light

From being bedridden to being able to sit unaided for more than 10 minutes, Hamidah, who has been paralyzed for fourteen years, can now finally see the outside world from her windows. Having received Tzu Chi Home Care Services for less than a year...

Medical Volunteers Help a Stroke Patient Stand Up on His Own

Tzu Chi’s TCM doctors and volunteers regularly visited the home of a stroke patient to give him acupuncture treatment as well as emotional support. With their continued care and love, the patient is finally able to stand up on his own.

Medicine, being a noble profession to safeguard life and health, is a calling to genuinely care for the sick. It was no wonder that four of Tzu Chi International Medical Association’s (TIMA) nursing professionals received the Healthcare Humanity Award (in