Outpour of Love from a Shopping Paradise

Tzu Chi volunteers in Singapore have begun fundraising in their respective zones since 25 Mar to raise funds and elicit compassion for the earthquake and tsunami victims in Japan. On 27 Mar, more than 300 volunteers set out to Orchard Road to knock on the hearts of shoppers and tourists asking them to shower their love and lend a helping hand to those affected in Japan.

“I feel sad seeing the serious situation in Japan. I want to help by donating too,” said Elinita in an elevated voice competing with the noise in the overcrowded Orchard MRT station.

The Filipino domestic helper has been working in Singapore since 1994 to provide for her family back home. On her day-off on Sundays, Elinita would catch up with her Filipino friends at Orchard Road to ease her homesickness. She was moved when she chanced upon the Tzu Chi volunteers pledging and bowing to the passers-by near the MRT station exit, and quickly made a donation, at the same time apologizing that her contribution was too little.

Knowing well that every kind thought counts in times of frequent catastrophes, volunteer Lim Chee Wah quickly responded to the Samaritan that she could help the planet by living more eco-consciously and taking up vegetarianism. A surprised Elinita affirmed: “I like animals very much and I don’t want to harm them”, and decided to shun meat altogether since she was never fond of the meat diet.

“Animals have feelings; they will feel pain too. I promise I will stop taking meat from today onwards!” Elinita said and raised her hand to signify her resolution.

After the 9.0 magnitude earthquake and the ensuing deadly tsunami on 11 Mar, Japan is now trying to recover from the string of disasters compounded by a worrying nuclear crisis and numerous aftershocks.

Master Cheng Yen was deeply saddened by the catastrophes and the predicaments they brought on to the affected people, but the founder of Tzu Chi was also greatly impressed by the Japanese’s level-headedness and mutual concern for one another, and called upon all global citizens to pray for the peace and safety of Japan as well as the whole world.

Albeit commencing later than their global counterparts, Tzu Chi volunteers in Singapore went all out to amass love and donations in their respective zones starting 25 Mar evening. More than 300 volunteers were also mobilized to solicit donations along the sprawling shopping district of Orchard Road on 27 Mar, with two to three volunteers stationed every 20 metres along the boulevard, up until Somerset and Bugis.

Carrying donation boxes and posters bearing the message of “Help Japan with Love” and with flocks of people rushing past through them, the volunteers' orderly manner and humble calls attracted many passers-by to slow down their pace.

“I’m pleasantly surprised to see so many people in Singapore raising funds for my country,” remarked Japanese scholar, Shunichi Tachibana, who was bringing his group of students for a walk around the shopping district that afternoon.

Although Tokyo, the city he lives in, is about 220km away from the Fukushima Daiichi nuclear plant and is considered safe from the radiation leak released by the damaged nuclear reactors, the donor knows well that every man has a share of responsibility for the fate of his country.

“Japan is very cold now with temperature below ten degrees Celsius, but you guys are here standing under the scorching sun asking for donation for my people. I really appreciate that,” Mr Tachibana said with a reddened eye while wiping away his perspiration. He bashfully explained that his reddened eyes were not due to emotion but caused by the afternoon heat.

The volunteers then informed the Japanese that Tzu Chi volunteers in Japan have gained access to Oarai in Ibaraki Prefecture and provided hot meals for its 300 townsmen, while shipments of aid supplies have arrived in Tokyo waiting to be distributed to affected areas. Mr Tachibana was surprised to learn of the news and was delighted when the volunteers handed him a Tzu Chi pamphlet with the contact number of Tzu Chi Tokyo chapter, to which he said he will find time to visit when he is back in Japan.

The beauty of mutual compassion

Like Mr Tachibana, many Japanese tourists and residents have stopped to speak with the volunteers and make donations when they caught sight of the word “Japan” on the posters the volunteers were holding. Though some of them are not fluent in English, the volunteers were heartened by the familiar “Gambatte (Keep It Up)” and “Arigato gozaimasu (Thank You)” cheer by the Japanese friends and echoed the same excitedly. Some of the donors even filmed or photographed the volunteers in action saying that they will show the footages and pictures to their family and friends back home to let them know that the world is concerned about the tragedy that has struck their country.

Mdm Louraine from South Africa was equally elated when she saw “there're people raising funds for the Japan victims on the streets”. The 71-year-old tourist who embraced the volunteers dearly like long-lost friends was in town to visit her daughter when news of the quake and tsunami broke out.

Referring to the event as the most serious disaster facing Japan since World War II, Mdm Louraine told the volunteers that she couldn’t help imagining herself as a victim while watching the news on TV: “I've been imagining what if the same situation happened to me and I woke up to find my family gone, my house and my car…and everything else is gone……”

“Life is so fragile,” she concluded sadly.

Although she couldn’t volunteer herself to help the victims, the South African wished that everyone could give what they can to help the Japanese victims rebuild. “I respect every one of you for doing this," she said to the volunteers while making her donation. "I hope your lovely volunteers would inspire more people to give love.”

Every little makes a mickle

For the Tzu Chi volunteers, the streets can also double as a spiritual cultivation ground as they witness the myriad of human reactions among the busy shoppers. Despite cold shoulders and incredulous looks, the volunteers still respond with humility and bowed down to every passer-by, more so to those who take time to stop and donate their kindness.

At a spot on the boulevard, a couple looking almost 80 years old were selling ice cream by their ice-cream tricycle. The husband and wife ride it from Redhill to Orchard, rain or shine, everyday.

At one point, the husband, surnamed Chen, walked from his tricycle and dropped five dollars to the donation box. “It’s not much," he said of the amount he and wife earned through selling one-dollar ice cream, "we're just doing what we can.” The receiving volunteers were very touched by his words.

Outside the Bugis MRT station, an elderly lady carrying bags of tissue paper slowed down to find out the cause of the fundraising from the volunteers. Upon hearing the purpose, the tissue paper seller quickly took out some notes and dropped them into the donation box, adding timidly that "I don't earn much as I sell my tissue paper at one dollar for three packets so I can only give this much."

Overheard her remark, an ice cream peddler at the side too came forward to give his donation. Similar ripple effects could be felt by the 832 shifts of volunteers who took to the streets that day, evident through the heavy donation boxes which were sent back to the Tzu Chi Singapore branch office.

The Earth is overburdened and sending out more and more warning signs to its citizens. In light of Tzu Chi founder Master Cheng Yen’s wish to accumulate the love, blessings and prayers of more people for those suffering in Japan, more solicitation efforts across the communities will be slated by the Tzu Chi volunteers in the following weeks.

Before setting out to their assigned posts, the volunteers first offer one moment of silence for a solemn prayer for the earthquake and tsunami victims in Japan. (Photo by Chua Teong Seng) 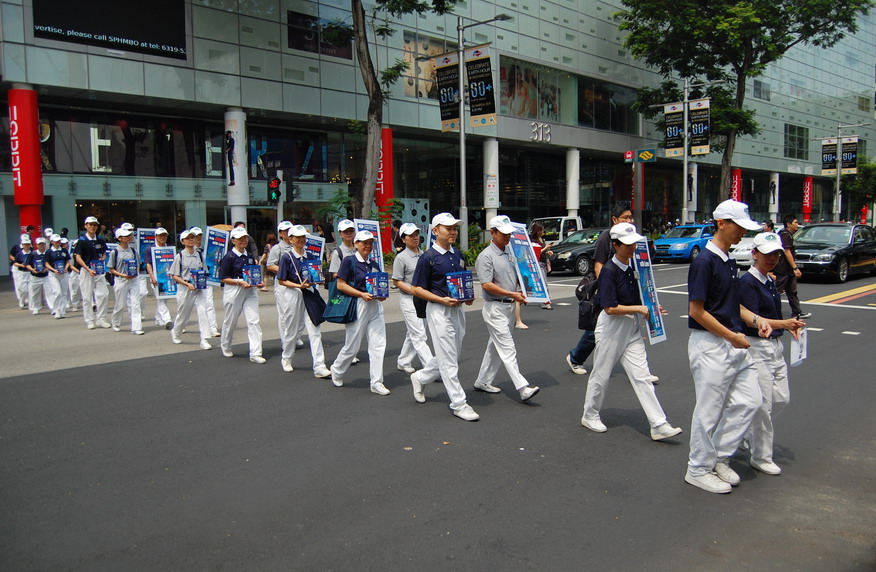 With hearts set to amass help and love, volunteers happily trudge the busy streets of Orchard Road to solicit donations from the public. (Photo by Pua Poo Toong) 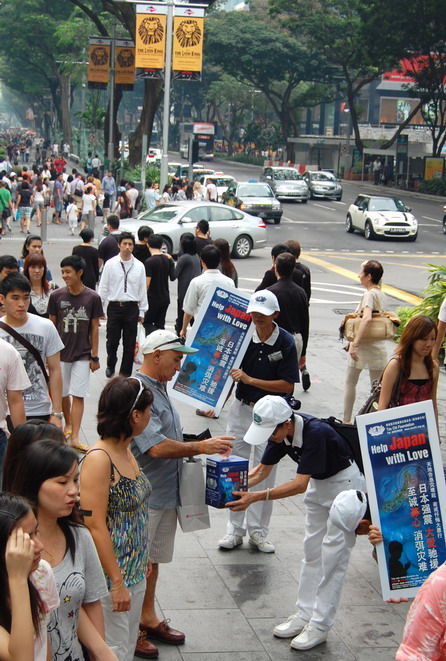 The inherent compassion of the passerby, regardless of differences in nationality and religion, emerges as they decide to share their blessings to the disaster victims in Japan. (Photo by Pua Poo Toong) 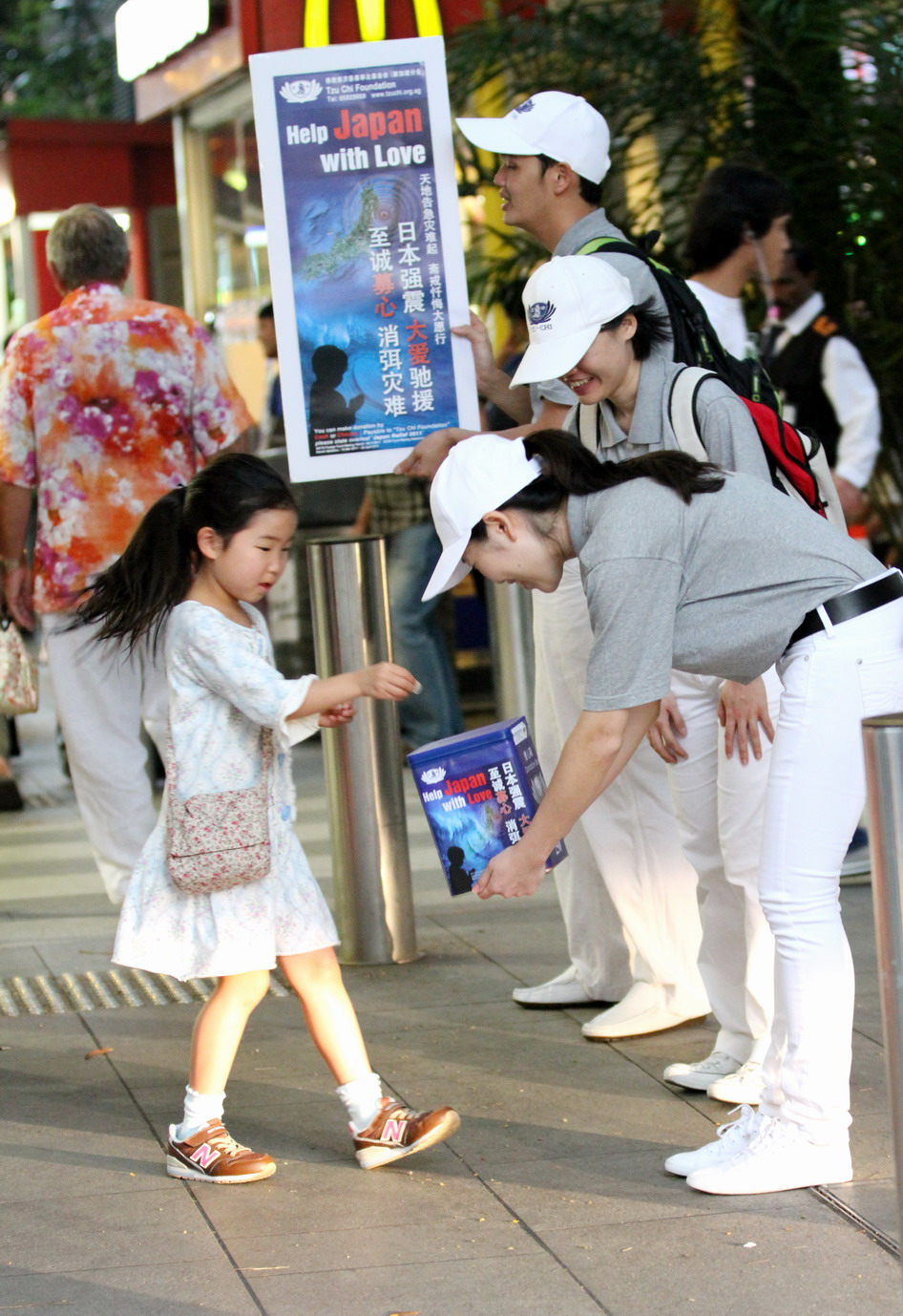 The young also make contributions to the disaster relief funds of Tzu Chi Foundation for the earthquake victims in Japan. (Photo by Chua Teong Seng)

The public's empathy for the Japanese victims is what keeping the volunteers going. Picture shows a gentleman stopping to donate despite the rain. (Photo by Chai Yu Leong) 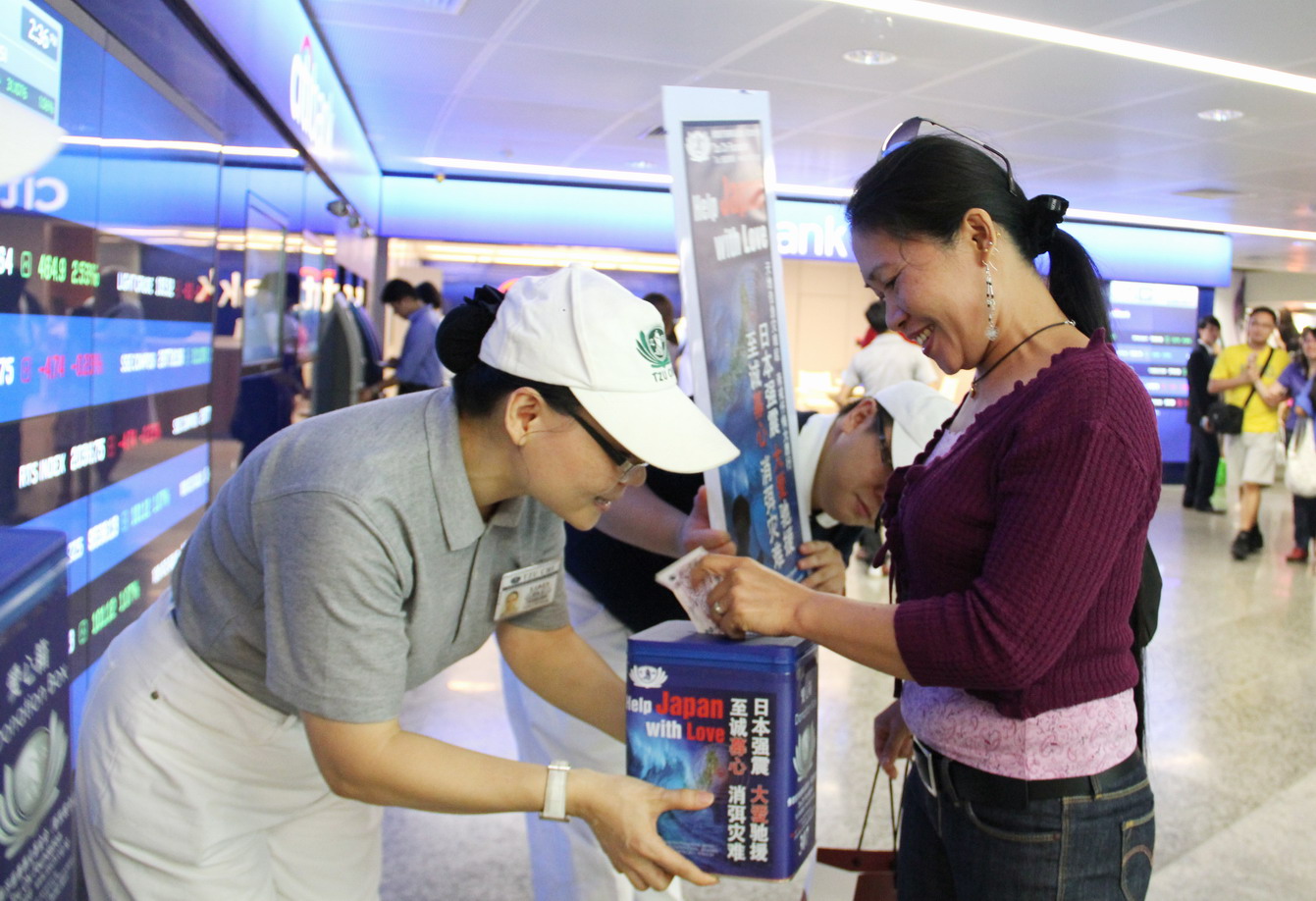 Elinita from the Philippines making her donation. (Photo by Lim Chee Wah) 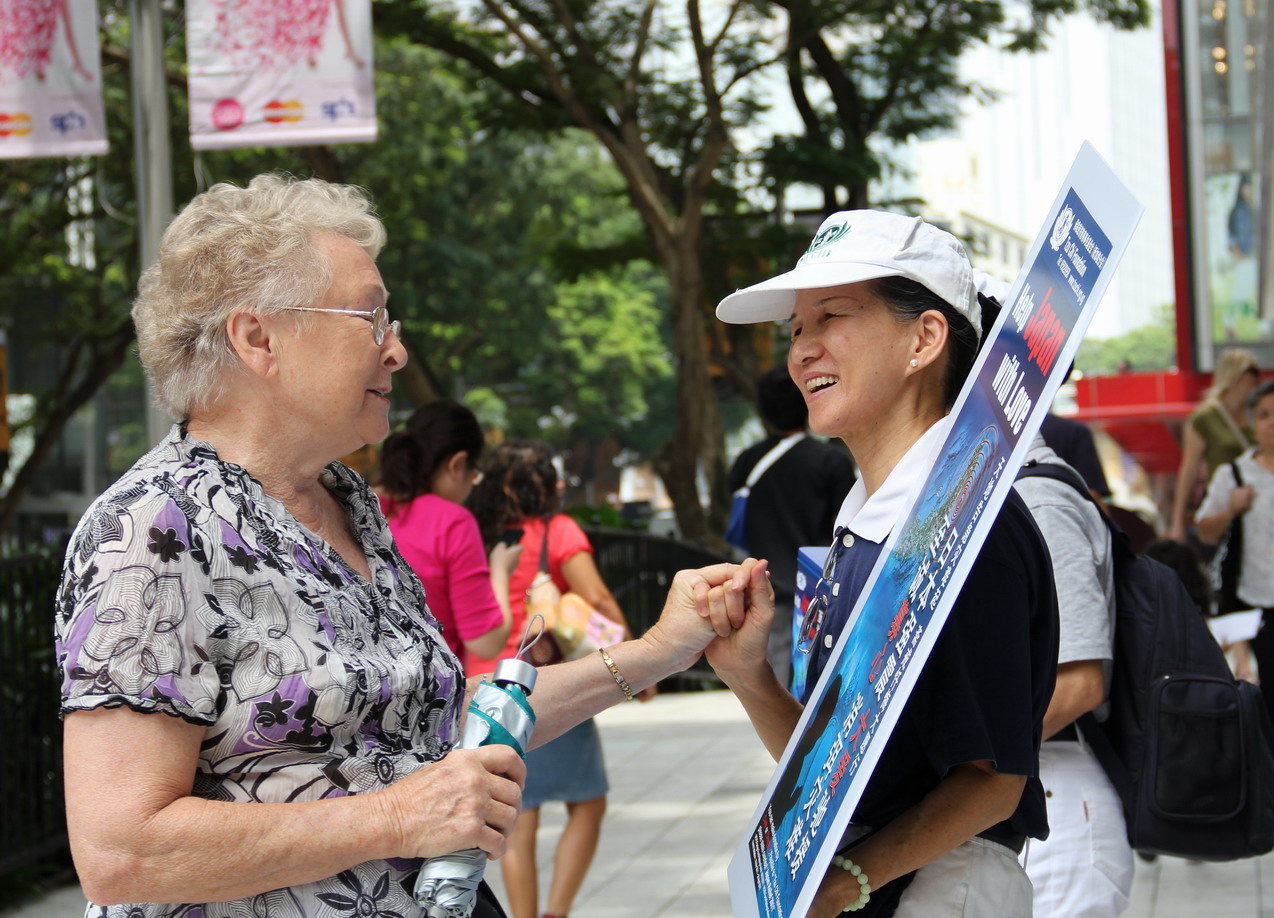 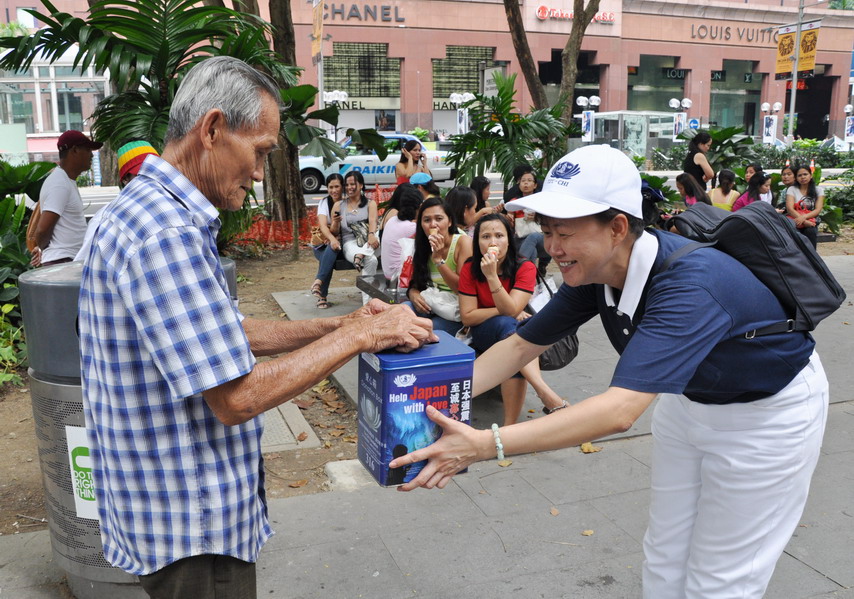 An ice cream peddler at Orchard Road giving his hard-earned money to the cause. (Photo by Ng Shey Ying) 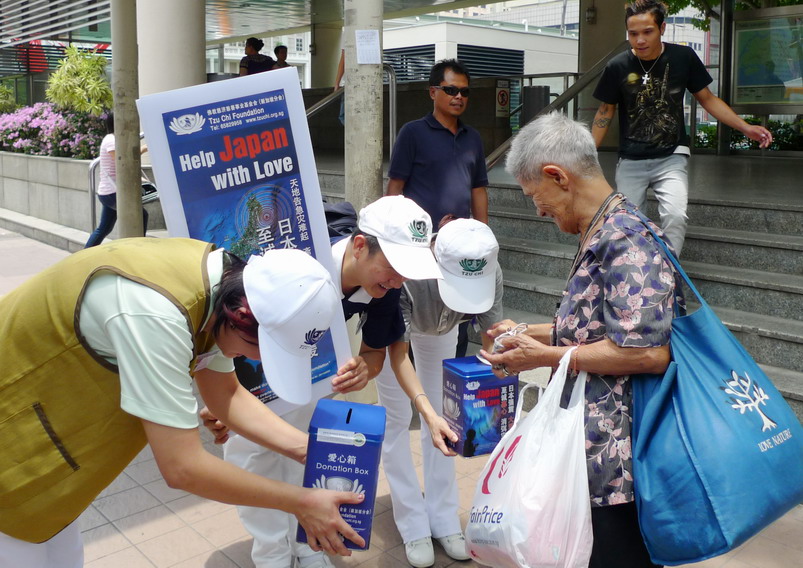 A granny who earns a meagre income selling tissue paper takes time to stop and drop her donation. (Photo by Yan Su Yuan) 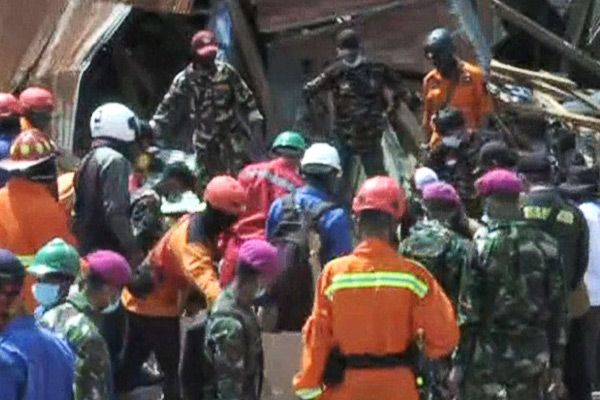 In the devastating aftermath of a powerful 7.4-magnitude earthquake and tsunami in Indonesia’s Sulawesi, Tzu Chi Indonesia collaborates with the Indonesia military to provide relief for disaster victims in the hard hit city of Palu.

Firm Steps into the Future ─ Marking 51 Years of Compassion

As the leading bell was struck, the neat rows of assembled volunteers began their orderly march. The activity was a test of willpower and physical endurance; even with sweat-soaked shirts, the fitter young members helped struggling older members to...

After the community care facility (CCF) @ Tuas project ended, Tzu Chi Foundation (Singapore) extended its love and care to the CCF @ Big Box, where volunteers provided tea service to healthcare workers who were on the frontline caring for patients with mi